Objection to Application for Market Street Re-development: at 12 storeys 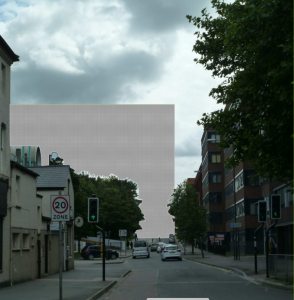 Picture of view to Market site at 12 storeys

Picture of view to Market site at 12 storeys

PDF – Sketch 1 for objections to market street re-development A

PDF – Sketch 2 for objections to market street re-development B

Swindon Civic Voice considers that any past objections by other parties to the loss of the market usage should be resolved by a consultation apropos of:

It is our hope to use our website in due course to promote/support such a consultation and we would like for it to a collaboration with Swindon Borough Council.

We can envision at least two other locations worthy of consideration, besides the obvious interim usage of vacant shop units in the Fleet Street retail area.

The ground floor use as shops/restaurants/cafes is sound in this location given the proximity to residential neighbourhoods, and to car parks.

The use of upper stories as residential units is also a good concentration at this location of entry to the retail area, next to existing residential areas.  The apartments in Farnsby Street, recent conversions from office blocks, present their own challenges and should not reduce confidence in quality provision next to Wharf Green.

Swindon Civic Voice are generally supportive of dense, quality apartments in Swindon’s town centre. In particular 2-bedroomed apartments that allow for sharing rental/mortgage, for home working, for a child’s bedroom or for a guest room. This sort of unit has a wider appeal than the current fashion for one-bedroom units. What’s more they promote more sociable, longer-stay communities.

We believe that this is the way to strengthen the retail core, and to re-use empty/tired sites. Notably those in the Bridge St. and Prince’s Street areas, as well as the market site and Morley St. areas.

We think consideration should be given to the flexibility of two-bedroom units. Such units allow for sharing rental/mortgage, for home working, for child’s bedroom, or for a guest room.  Units such as this have a wider appeal than the current fashion for one-bedroom units, and promote more sociable, longer-stay communities.

However, more than 100 units without ANY car parking is excessive, and likely to produce unhelpful outcomes.  We suggest that a connection might be possible via a pedestrian bridge between the proposed structure and the neighbouring car park.

We consider that twelve stories is not excessive in principle, against the backdrop of the Brunel Tower of twenty stories – which as a landmark could hold its own among others of lower height such as Jury’s Inn at eight storeys.  The height proposed is only a concern if a shadow study (which we have not seen) demonstrates an extended period of negative effect on Wharf Green/Market Street.  It would however be excessive if permitted on the proposed footprint.

Consideration does not seem to have been given to the appearance of the proposed structure from Farnsby Street/Faringdon Road.  At twelve (or even ten) stories, it would loom obstructively over that approach, which should be a welcoming one, as an entry point to the town centre.  Traffic and pedestrians approaching from this direction would find a towering prospect, rather than the pleasant Victorian focal point of the (renovated) shops in Commercial Road, appearing against the backdrop of Swindon hill behind them.  There is a sightline from the Railway Village up/down this vista.

We have given much time to considering the site, and have noted that it is a legacy of the 1970s re-working of the town centre road layout.  Until the one-way system was introduced, Farnsby Street was lined on both sides by Victorian redbrick terraces. The street did NOT connect with Commercial Road, as there was a canal in position until the 1960s, and the bridge was at Milton Road.

From 1894, a market was established and developed into a well-built structure on the adjacent site to Commercial Rd/Milton Rd., serving until demolished in the late 1970s.

We have been told a councillor accused the old red brick market of ‘not matching the new Brunel Centre’ and left it as a shell wall around a carpark for almost 20 years.  The opportunity was missed in 1994 to re-align Farnsby Street, with a smoother sweep into Commercial.  Instead, that major entry point forces drivers to drive around the market site, and presents unpleasant crossings and frontages to pedestrians.

Elsewhere we have promoted the idea of 2-way traffic in Farnsby and Commercial Roads, with a more pedestrian-friendly ‘green, heritage’ route via Milton Road (which could become local access only).

Here, we are concerned to point out the missed opportunity to re-lay the former Market footprint, out of the roadway, and closer in toward Wharf Green – enhancing both frontages.  We also consider that land could be gained to the carpark side of the site.  This and Market Street were both connected to a through road grid before construction of the Brunel Centre in 1970’s.  They may therefore hide a range of service infrastructure beneath. But we believe the extension and shift northwards of the site might benefit in several ways.  This raises the fact of the ownership of the land being in the hands of Swindon Borough Council.

Swindon Civic Voice understand that the proposed site is owned by the Council and leased since 1994 to the market owners (who have changed hands a number of times/portfolios over the years).  The 100-year lease in 1994 would now be around seventy-seven years to run.  In the interest of a twelve-storey block rather than a twenty-five-year tent, surely a longer (999?) year lease will have to be negotiated.  The Council stands to earn from the extension of this lease. However, it also might attempt to influence the quality of this development by offering to re-negotiate a somewhat larger and better-placed site.  This could integrate more happily with Wharf Green, Brunel shops and Market Street shops.

At the same time, proposals might be sought for the council-owned surface level car park at the end of the shops, fronting onto Commercial Road.  There is a long planning history surrounding this site too. But its development should feature a structure that helps conceal the ramp and delivery access to the Brunel Tower.  Thought should also be given to the fact that the Deacon St/Market St axis leads up to the beautifully laid out Radnor St Cemetery. This itself offers dramatic views over Swindon, and views in both directions should be considered as part of the designs.

It seems entirely possible to holistically develop one whole access point to Swindon town centre that benefits residents, drivers, pedestrians, shoppers, and ratepayers all in one sweep.  It would be a step-change for Swindon, which has been plagued by piecemeal development for too long.

Swindon Civic Voice objects to the application on the current footprint of the site, in particular for its dominance of the uphill approach via Farnsby Street and for the lack of traffic and streetscape improvements required by the Swindon Local Plan.

NB: If you have any comments to make on this please email: info@swindoncivicvoice.org.uk

For a history of Swindon Market go here: http://www.swindonmarket.co.uk/history.html

If you wish to make any comments to the council on the proposed new development you have until September 20th.