Event: A Talk by Richard Wintle

Event: A Talk by Richard Wintle

Event:A talk by Richard Wintle: It’s the middle of August and here at Swindon Civic Voice we’re putting together a programme of autumn events.

We’re totally thrilled that Richard Wintle – perhaps better known as Calyx Picture Agency – has agreed to do a talk for us.

A Journey through the Four Million Images in 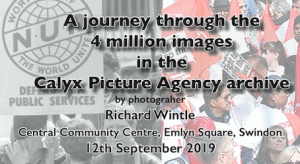 Where: Central Community Centre, in the GWR Railway Village

Richard’s camera lenses have been present at Swindon events for what seems like forever!

Come to Central Community Centre on Thursday 12th September to:

‘Take a ride through a selection of the 2 million negatives, 2 million digital images and hours of local news video that Richard Wintle and his team have amassed over 50 years of media photography, mostly in the Swindon area.

Travel through a time warp as news events link up in a chain of coincidences that will show a picture is only the start of the story.’

A PDF Poster of the Richard Wintle talk is available here 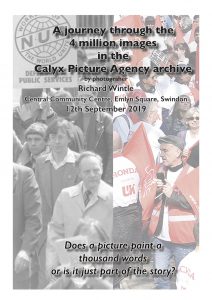 From the About Us section of the Calyx website:

Calyx Multimedia is a Picture and TV agency based in Swindon in the south-west of England with a specilist archive on the British Royal Family.

Besides that they specialise in Press, PR and feature photography for national newspapers and agencies. We have freelance feature writers and PR professionals who can undertake commissions.

And, talking of time Warps: https://youtu.be/vBHONx9vTtI – Let’s do the time warp again!