Posted on January 3, 2020 by Angela Atkinson

Our second event of 2o2o, on Thursday 20th February, is a talk by Darryl Moody of Local Studies. (Our first talk being Adam Busby talking about the GWR Medical Fund Society )

In August 1960, Librarian Harold Jolliffe wrote to the Swindon Advertiser appealing for “the raw material of local history”. The Local Studies team at Central Library continue his project to this very day, building a vast and ever-growing collection of local photographs, books, directories, postcards, maps, photographs, CDs, videos, DVDs and much more. Local Studies Librarian Darryl Moody talks about their mission and showcases some of the many weird and wonderful discoveries they have made along the way. 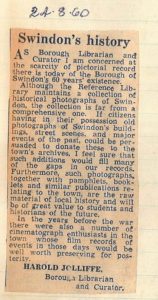 About Harold Jolliffe – ‘The Father of Cultural Life in Swindon’

‘ … Swindon would be a much poorer place to live had he not been here, and we have him to thank for our Arts Centre.

“The Father of Cultural Life in Swindon”? This is no sentiment-driven comment about a former public servant. It’s a statement hard to argue with; in much the same way it’s hard to dispute that Brunel sired the town’s industrial success.

Harold Jolliffe was the Chief Librarian and Curator of Swindon Borough Council for 23 years. He died on Wednesday, 8 January 1969 at the age of 54.

A native of Bury in Lancashire, he was appointed Chief Librarian for Swindon in 1946. In November of that same year, he oversaw the opening of the country’s first dedicated municipal Arts Centre, here in Swindon.

That building wasn’t in the current site on Devizes Road. Rather, it was in the town centre, in a church hall leased for ten years. The growing commercial value of that site, and the Council’s inability to match those prices meant that by 1955 a change became inevitable …’

** See Secret Swindon and Swindon in 50 Buildings for more on Local Studies and the Arts Centre. Also:

This entry was posted in Talks and events and tagged harold jolliffe, swindon local studies, swindon web. Bookmark the permalink.